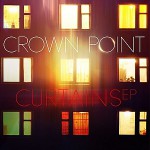 After three years together, Crown Point are the perfect example of how a band evolves. When singer-songwriters Jon Davidson and Russell Stafford first aligned at the beginning of 2010, both came to the project with industry pedigrees. Stafford was actually signed to Sony Australia before he moved to the US. Davidson and Stafford put their band together slowly, methodically, with intention. They released a six-song EP, Wolves, a couple of years back.

That record met with modest acclaim. The single “Back to You” received airplay on over one hundred radio stations across the continent, a tally which may or may not have the cache it once had, as—with the advent of the internet—there’s three “radio stations” on every block. Still, the song was well-enough liked to be played over the airwaves and that is Mission One for most bands. Mission accomplished.

Not long after the release of Wolves, the team added drummer Kaycee Kay to the line-up and hit the road in support of the record. As is evidenced on any piece of promotional material you might find about Crown Point, they’ve logged over 70,000 miles touring the nation over the past three years, relentlessly plying their material in front of the public. These guys are pros and they know what it takes to succeed.

If one were to base his impressions of the band upon the six songs found on that EP, he might reasonably conclude that the Pointers might be a Christian rock band—not that there is anything wrong with that, necessarily. But it is a genre unto itself, with its own musical touchpoints and historical references, perhaps unknown to the everyday secular world. Many of the songs on the EP suffer from breathy, moany, gushy vocals familiar in the context of one attempting to express his relationship with God as a sexual encounter—the ulterior, high-octane, Christian double-entendre lyric meter running way in the red. Or not. But that’s what the lyrics sounded like.

Combine that with a safe, proficient ‘90s artistic sensibility, akin in places to Extreme circa the “More Than Words” period, or Bon Jovi around the reformation of the band early in that decade. Put that all together and what have you got? I’ll let you tell me. I’m no expert.

It is not clear when, exactly, but at some point in the intervening two years the trio became a quartet—adding bassist Peter Arvidson. That served to solidify the rhythm section. And it also to freed guitarist Russell Stafford (with support from lead vocalist Jon Davidson) to broaden his sonic palette, adding richer colorations to the seven new songs found here, as well as embroidering finer, more ornate detail into the fabric of the mix.

Produced by the band at Black Diamond Recording in East Portland, this record bears a glistening sheen: radio-friendly, right out of the box. “Curtains Drawn” begins with the comets of Stafford’s soaring guitar lighting the path forward. Reminiscent of U2’s Edge or (now former) Editors’ guitarist Chris Urbanowicz, but most of all of Jorge Barcala from an unfortunately widely-ignored Miami band from the early ‘90s called Nuclear Valdez, Stafford bestows a veil of incendiary cosmic urgency to the introduction.

The song culminates in a lovely, haunting chorus. Imagine A-Ha’s Morten Harket singing the chorus of Dusty Springfield’s “You Don’t Have to Say You Love Me.” Go ahead. I’ll wait here. That might take a while to conjur. Well, this chorus sounds nothing like that, but at least it will put you in the proper mood and give you the necessary perspective to understand where this song goes, entirely in a 21st century context, mind you. Nicely turned.

A reverentially ecclesiastical number, “The Room” begins quietly with organ-like tones resonating solemnly to set the mood. The vocalist (possibly Stafford) aches and ponders vocally, accompanying himself with chiming rhythm guitar, before the military march of Kay’s snare propels the procession forward. Vocally, the noble perfect 5th interval is utilized as a means of passionate melodic expression. And while it connotes a sense of strength, it is nearly a cliché among the more operatic singers in rock world today for its heroic overstatement. There are certainly more evocative choices in the realm of note selection. That one’s been wrung dry.

The band maintains a sense of restraint throughout the second verse and through a well-built bridge. The chorus is pretty and pretty memorable. Stafford’s guitar work especially does much to fill in the sonic spaces of the arrangement with deftly placed filigrees. Stafford also plays a fundamental roll in “Afterbirth,” a song that has much in common with the first track. Another triumphal guitar intro, and dazzling fills and interjections, bring the song to full fruition, as Davidson sings, “Here in the afterbirth I long to know/What has become of tainted embryo/What in the name of freedom supervenes/Sanctioning predilection for the obscene.” Holy shit! You better hope this recording comes with dictionary included.

So obviously it can be a tough slog through the words to these songs. Not unpleasant. But a challenge. I have a pretty good vocabulary and I know what those words mean, but I have no idea what Davidson is attempting to convey. I’m thinking he’s saying: “Here in this mess I wonder what happened to the dream—what caused fucked-up shit to be accepted as okay?” That’s my guess, but who’s to say? And while all this deliberation is going on, Stafford is nailing down every loose end with riveting guitar lines. He makes the song special.

With “Head First” the creeping sense becomes apparent that a theme of birth is being explored (or at least alluded to) in the lyrical presentation of these first four songs. The libretto often being so dense (though penned by both Davidson and Stafford) it is sometimes difficult to understand what the hell the band is trying to say. They are earnest, certainly intelligent; but sometimes unintelligible too. “Triple point, we will melt to freeze again/Misannoint a scapegoat for our sin/Where’s the judge? I’ve forgotten my crimes/You begrudge, and again I’m doing time.”

Crown Point must run with a pretty esoterically erudite crowd, because, if that verse is in regard to an interpersonal relationship, it is way too circumspect to accomplish much. And if in regard to faith or a deity, the analogies and parable-like indirectness would seem only to serve the spiritual conundrum most people would hope to have resolved. Either that or this is a new form of Zen Christianity, where the question is the answer and one dare not ask wither. In other words, these guys really need to get to the “point.”

If we take “Head First” as a sonic collage, with the vocal serving as an instrument and not as a conveyor of words specific to the intent or meaning of the song, we are offered a languorous presentation— Stafford’s vergeless, cloud-like guitar hovers above a box of rocks drum loop, while Davidson croons in a whisper the sound of words as vapor. A vigorous chorus jumps to the fore, followed by a simmering solo from Stafford.

The intro to “Set Fire” sounds like something from Interpol’s Our Love to Admire, Stafford’s ringing guitar attack, reminiscent of the work of Daniel Kessler. The chorus breaks into one of those anthemic chants where one expects a crowd rife with arms aloft, lighters waving wildly in up-thrusted hands. A good choice for a single for just that reason (although it would appear that “The Room” bears that distinction). Here the lyric seems to reference touring: “We’re gonna pack our bags and hit the interstate,” but by the final verse, you’re lost again. However, the simple chorus saves the song from becoming too pedantic, which is a step in the right direction.

Reaching back to their roots, Davidson and Stafford perform as a duo through the verses of “Better Run For Cover,” just two voices and two guitars, without bass or drum accompaniment. Their vocal harmonies recall the Rembrandts, whom are probably best remembered for giving to the world the Friends theme (“I’ll Be There For You”) and “Just the Way It Is, Baby” in the ‘90s. Here, the undertone is more indistinctly apocalyptic, intimating imminent disaster of some sort: a hip, pop prophecy of pending doom.

“Record On the Radio” is another laidback affair. Pretty much just the two voices and a couple of guitars. Stafford sings without a lot of pretense and facade, which confers upon the uncomplicated song an authenticity the other songs seem to lack. There is also an abbreviated “radio edit” version of “The Room” included in the package I received—but I prefer the extended version, where the mood is allowed to grow organically.

Crown Point present a musical and philosophical puzzle. Let’s see if we can piece it together. First of all, I think they are a very good band. They write and produce excellent music. But it’s a victory of style over substance. The band sounds great! Everything is in its proper place and is executed with great precision. The arrangements are solid and well plotted.

But there is also a seeming lack of sincerity, or emotional honesty perhaps— in what seems an attempt to mislead an unsuspecting public as to the band’s veiled righteousness. It seems as if Crown Point are unwilling to commit to their real beliefs. And that’s not being fair to their music, their faith nor to an audience that might benefit from the insight they have to impart. There is a veneer to the presentation that is artificial. It’s not true. If the lyrics are written to make a point, the point is completely ambiguous and vague. They seem romantic, but they aren’t. They seem to speak to romantic relationships, but they don’t. Not really.

I don’t want to get into a big philosophical debate over the subject. Not here. Music is too precious. And there is a place for every kind. Music we love, music we don’t care about, music we hate. There’s room for all of it. But it is important that the musicians purveying it believe whatever they are playing and saying, whether it is deathmetal, polkas or lounge music. Music expresses an unique energy to the listener. But if the presentation is artifice or somehow duplicitous, there is a danger of losing the entirety of one’s audience, unless they are all in on the joke.

In many respects, Crown Point’s music is similar to that of Dan Reed. The intent is inspirational. But Dan is at peace with himself as a musician and a human being. His songs are always very spiritual in a very direct way. They are not religious. His lyrics refer to love, among other genuine human conditions. He isn’t trying to hide his feelings or to portray them as anything they are not. His admirers love him for that directness.

It may be true that their disciples love them and understand precisely what the band is saying. If that is the case, then Crown Point has a crucial choice to make. Either they can continue to proceed down their current path, surely acquiring a body of loyal fans as they go, fans in tune with the implied significance of the material—or, as appears they desire, the band can take the risk and attempt to appeal to a wider base. As it is here, we have a really good band that can’t seem to fully articulate the message they wish to reveal. They are simply talking in riddles and rebuses—a reverberant glossolalia.