My buddy Steve “Pearly” Hettum has been running an Open Mic for a long time now. For many years he hosted the Wednesday Night Open Mic at Eugenio’s on Southeast Division to ever-increasing success. Steve’s good-natured affability and knack for commanding attention always served as the foundation for those affairs. Many of the nights that I was in attendance the room was filled with an appreciative audience for the long list of musicians who waited for their turn to play.

It’s been an ongoing battle for quite some time, one that Eugenio’s finally lost. Always low-key, usually acoustic in nature, live music at Eugenio’s has still been a relentless bone of contention between the restaurant and their neighbors: a recording studio. Ironic perhaps. Like a nut processing plant next to an allergy clinic.

And it’s well known that the hours between 7PM and 11PM are incalculably valuable in the area of music creation—that being the only time of day that many musicians are conscious and functionally cogent, to the extent that such a thing is possible. So the collision of forces would seem obvious. Here’s a clue to the outcome. That recording studio makes a helluva lot more money than the restaurant. Just sayin’. Game over. Money talks.

The upshot is that Pearly had to move his Wednesday Night Open Mic to another location. That’s easier said than done, I might say. Location. Location. Location. But, destiny and providence conspired when the owners of Duff’s Tavern recently opened up a cozy little club on the suddenly vibrant and hip Foster Road (we’ve seen it happen before on the eastside, first on Belmont then Hawthorne, now Division. Apparently Foster will be next).

The Starday Tavern at 65th and Foster is a narrow room with comfortable booths arranged down one side of the building and a bar running the length of the opposing wall. There’s a small stage to the left, just inside the entry and a game area at the very back. The place can’t hold a lot of patrons. But neither can Eugenio’s. That doesn’t necessarily mean you can’t jam a lot of people inside the place if the night is right.

So Pearly has moved his Wednesday Night Open Mic operation to the Starday. I think he’s been up and running about a month now. It takes a while for the energy around those sorts of hootenannies to take shape. Not all of the Eugenio’s regulars are likely to make that two-mile trek. But every week, so far, there has been a new twist to the proceedings, with an incremental increase in participation and a comparable membership upsurge in audiences of appreciative listeners.

On the last Wednesday in January, toward the end of the night, some newcomers took the mic. I’d seen Matty Charles around. He’s the good-looking, tattooed bartender at the Starday (I came to find out he also does guitar restoration and repair). Consequently, he’d poured me a few beers on a couple occasions, for one thing. I was also told that he has been a bartender at Duff’s, but I don’t remember him when I’ve been there. That, however, means absolutely nothing.

Thus, it came as a bit of a pleasant surprise when the evening’s bartender surreptitiously sat down at the mic with his guitar to perform an all-Americana duet with a tall, pretty, dark-haired woman named Katie Rose. And from the first syllables out of their mouths to the final note, their short set was entrancing. It just goes to show.

They reminded me most of Gram Parsons and Emmylou Harris during the Grievous Angel period, although Matty has a better voice than Parsons, and Katie has less of Emmylou’s hickory pliancy, but a purer tone. 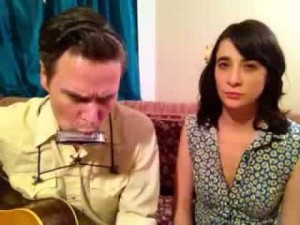 Still think of Parsons and Harris singing Lowell George’s “Willin’” (from Linda Ronstadt’s Heart Like a Wheel) and you get a good feel for their presentation in the plaintive “Glorietta.” “Had a drunk in Reno/Got a flat in San Antone/Met a girl in Chino/But I ended up alone.” I think we’ve all been there (figuratively, at least).

I didn’t get around to asking if their songs were originals, but I never heard them before, so my guess is probably yes. That being the case “What I Want” affords Matty the opportunity to explore the lower end of his reedy baritone register, recalling the forlorn nomadic reserve of Townes Van Zandt (“Pancho and Lefty”). He and Katie share a country twang in the rendering.

It’s a love-gone-wrong type of country song that tells a bittersweet tale of heartbreak, remorse, and regret-filled reflection. As a song, it could benefit from a bridge (an interesting twist might be a turn from the woman’s perspective, sung by Katie), but a strong chorus brings it home, nonetheless.

Though Matty Charles has been playing music for quite some time (in Brooklyn, apparently), he and Katie have only been working together for six or eight months, so it’s a bit of a new enterprise. Still the precision in the delivery of their vocals indicates obvious care and attention to detail in the creation. Having only heard them once, and briefly at that, I am not sure of their entire repertoire, but I would like to hear Katie in the lead vocal role occasionally.

And there is certainly no denying their very special vocal blend.It will be fun to watch the progress of Matty Charles and Katie Rose in the weeks and months to come. Look for them to open for Birds of Chicago at the Alberta Rose Theater on March 6th.

Look, too, for Pearly Hettum’s Wednesday Night Open Mic at the Starday on Foster to continue to grow and thrive. Since his days as manager for Billy Rancher and the Unreal Gods, way back when—Steve has always had the propensity for bringing people together to work in harmony. As we all know: that’s a real gift!

The width and breadth of talent that he helped to showcase at Eugenio’s is sure to follow him to the new digs. It’s only a matter of time. Matty Charles and Katie Rose have already shown up for a showcase and I expect they will be returning again quite soon. After all, it’s a very short walk for Matty from behind the bar to the mic.