Steve Hettum, known as “Pearly” to his friends, died on February 8th, 2016. At the end of March, SP Clarke published a review of Steve’s final album, Folks Like Us, and a bit of an obituary. This month J. Michael Kearsey steps forward with a formal obituary for Pearly Hettum. A proper send-off. Michael, who has been a fixture in the local music scene since the 70s knew Steve very well, going back thirty years. They toured the UK together in the mid-80s and shared many adventures.

Michael played bass, with Dennis Elmer on drums, and Houston Bolles on lead guitar, to form the Janglers—Pearly’s crack backup band. Steve Hettum’s loss has hit a portion of the Portland music community very hard and efforts continue to bring life to some of the traditions he started. 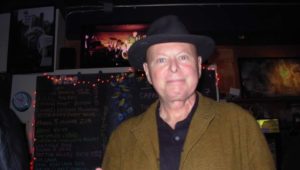 Steven Charles “Pearly” Hettum died peacefully and full of song on Feb 8, 2016. Born and raised in Gresham, graduating from Centennial High School in 1975, he spent a year at OSU and moved on to PSU as an English major. He met musician Billy Rancher and became his manager, taking him from bar rooms to a contract with Arista Records.  Rancher was stricken with lymphoma and the recording contract was quashed.

Steve went on to the University of London, studying classic English writers and poets. He met musician Mike Kahn, who accepted Steve’s offer to come to Portland touring the West Coast in 1985. In 1986 Hettum and Kahn brought Portland rockabilly trio, the Rockin’ Razorbacks, to England and then brought English blues musician, Mick Clarke, to Portland in 1987. Steve began to release his own records in the late 1980’s with titles Simple Elegance, The Jangler, Middle Age Man and Fishermen’s Ball. On a trip to Nashville, his producer noted his voice wasn’t golden but “Pearly”- a nickname that stuck.

He married Betsy Shanklin, loved her daughters as his own and became a father when son Emmet was born in 1992. Moving to Gold Hill, Steve worked as a musician and bartender, returning to Portland in 2000. He recorded two more CD’s with his band, the Janglers, including this year’s CD, Folks Like Us. All his records are available at Music Millennium, CDbaby.com and Localsonly.org.

Diagnosed with cancer of the tongue in 2013, he had a successful skin graft but was told he might not be able to speak. Within a month, he was talking, singing and writing more songs. He established an ‘open mic’ night at Eugenio’s on Division to support local songwriters as well as traveling musicians. It ran for five wonderful years. When he was told he had terminal lung cancer last summer, he put his talent to work on his final album and continued to perform. Steve chose to have “A Wake While I’m Awake,” a musical event that brought together 300 of his friends and family on January 24th.

Contributions in Steve’s name may be made to the Oregon Music Hall of Fame Scholarship Fund at http://www.omhof.org to support high school seniors furthering their music studies.

One comment on “A Special Goodbye to Steven “Pearly” Hettum”