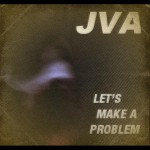 I’m pretty sure we went all through this about six or eight years ago when I reviewed one of Jim Walker’s albums (Terrible Pictures of Harriet, 2005), here and (earlier, in 2003) here, for Two Louies in what we at Buko refer to as “the waning days.”  I remember that Walker had been going by the name Jeroan Van Aiken when he arrived in Portland from Los Angeles in the early ‘90s. He’d pretty much done it all, as far as a SoCal musician can do it—forming a band that achieved modest notoriety, performances in community theater, songs and scores for films, voice-over work for high-profile clients—pretty sweet deal.

But, he ended up coming to Portland, as all musicians eventually must, where the livin’ is easy and the competition less fierce for all those influential gigs where you get paid what you were paid in 1992. (Fortunately, all musicians in Portland are independently wealthy and not availed of the necessity of “making a living,” as you people call it). So Jim came to Portland and he was Jeroan Van Aiken for a while. He probably was completely unaware of the fact that a variation of that name coincidently belonged to Hieronymus Bosch five or six hundred years earlier. It’s amazing how quickly these things depart the collective consciousness.

Then, about five years ago, a Virginia band named Gregor Samsa (named, of course, after Kafka’s man-bug) released the lovely song “Jeroen Van Aken” to marginal response. It would not seem that their election to tribute Mister Bosch by name had anything to do with Jim Walker’s determination to stop using the name, seeing as how he made that decision many years in advance of the Samsa’s release. However it remains unclear as to whether Bosch’s people had been in touch with Jim at some earlier date. Word is they can be a tough bunch.

Whatever the case, at some point Jim Walker as Jeroan Van Aiken became JVA. The significance of all this is beyond my scope as a “reporter” to further elucidate. Those are the facts. Arrive at your own conclusions.

The consummate songwriter, Jim has been plying his craft long enough to understand the structural components of a pop song and the proficiency required to fashion something original from them—a process not unlike the composition of haiku, wherein a certain precision and attention to detail are necessary just to get one of the damn things off the ground. Jim’s songs are familiar in context, but they tend to zig when you expect them to zag. After one hundred years or so of songwriting in the popular musical vernacular, I believe that is the highest compliment one can be paid.

Here we are given fourteen Walker originals. This is a true solo album, wherein Jim plays all the instruments and provides all the vocals (except backing vocals by Tiffany Carlson on a couple of tunes). The arrangements are uncomplicated, straightforward, succinct and varied in presentation, in some cases almost jarringly so.

The title of this endeavor, Let’s Make a Problem, might lead one to conclude it to be a biting polemic regarding the vicissitudes of unprotected sex. So, perhaps appropriately, we begin with “Sin.” It’s an acapella all-percussion accompaniment number, sort of Bobby McFerrin in nature, but much steamier than anything Bobby ever did (especially impressive is the tambourine)—and the “jungle” knob is dialed up to about 11. The dubby, “Baby, would you do that?” section is especially exotic. A memorable hook. Unusual.

“Concrete Hearts” moseys off in a whole ‘nother direction. It’s a twangy Tele, western-tinged tune with subtly supple piano and acoustic guitar backing. Vocally, here and elsewhere, Jim demonstrates the gritty edge of Glenn Frey and Don Henley with a touch of Timothy Schmitt sweetness. Eaglesesque. That’s a nice word for this song. A well-honed bridge sharpens the focus—“The days fall hard as rain and I can’t stand it/no place to go nothing to do/Each night’s an empty space, just how I planned it/Just passing time without you.” Walker’s Mark Knopfler-inspired guitar solo lends a windblown winsome quality.

Acoustic guitar, piano and a big drumbeat drive “Come and Gone,” a Paul Simon-like  composition. In a boyish tenor, Walker sings “Don’t tap the thin glass in my head/Coz the blackbirds circle there again/I see her faces in my sleep/So crowded in my dreams, I count a million fucking sheep” in a memorable bridge. “Bones” could be the work of “Dirty Laundry” era Don Henley—coarse in texture with a creamy pop center. Fine vocal harmonies and a catchy hook make this a memorable tune.

“Into the Sea” is dead ringer Eagles, circa Hotel California. Jim’s grainy voice is buoyed upon a wave of foamy acoustic guitar and sinister electric guitar fills. A familiar twine of melody wraps sinuously around the arrangement. Nicely turned. “Love Coming Through” is tougher in context, the grit in Jim’s voice more metallic, while the sentiment is softer. “Once” is mellower still, as Jim sounds like Glenn Frey uttering quiet confessions over simple acoustic guitar backing.

Dark apparitions shadow the lovely “Carry the Ghost” “I breathe my last in the cloak of the night/cold as a grave…” A moving chorus follows, then Jim’s most ambitious bridge of the set. “Don’t make me walk this lonely, lonely earth.” Well hewn.

Latin percussion, a Rhodes-toned keyboard and Spanish guitar decorate “Human Sea,” the most lyrically complex song among the fourteen. It’s an in-depth study of human nature, an immoral morality play, resembling somewhat Marty Robbins’ “El Paso,” in its thematic admixture of dark, carnal passion and heroic outlaw justice. “He stayed behind so carefully/Far enough so she didn’t see/And I stayed several paces down from him/I knew what he was waiting for/That electric moment where/He’d catch her for an instant in the din/Finally she turned a corner/Instantly he was upon her/Covering her mouth before she screamed/I put my blade up to his throat/Pulled back hard and watched it flow/Tipped my hat to her and made my way/Back to the human sea.” Nice.

Simple, unadorned piano supports the quiet love song “Perfect Idiot,” creating a mood of heartfelt intimacy. A Tom Pettyish “Learning to Fly” acoustic guitar jangle informs “Z.” The pacing of the song is quick, yet halting—akin to something the Eel’s Mark “E” Everett might create. Vocally, Jim sounds like E on this song, as well. Tasty backing vocal harmonies (some provided by Ms. Carlson) and a different feel from the rest of the material make of this one of the best songs on the album.

“Luxury” bathes in low-string pathos akin to the intro guitar line on Boy George’s “The Crying Game.” Walker meets the atmosphere with an evocative vocal, quietly delivered. Here again, another fine bridge helps to take the song to a higher level. Jim displays a keen understanding of the purpose of a bridge and how to use it.

Let’s Make a Problem is a wonderful exhibition of technique and skill. Jim Walker’s abilities as a songwriter are a cut above most. He creates refined compositions that bear clear evidence of careful attention to detail. His arrangements are simple, but direct and to the point. Jim’s not a great musician, but surely quite good—and a fine technician. Besides, great musicians never made for a great song. But a great song has made many good musicians sound great. Consider Jim Walker to be among the latter contingent.