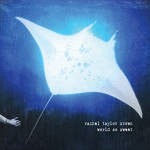 Put on your thinking cap, it’s another Rachel Taylor Brown album! You may have misplaced your thinking cap since Rachel’s last release in 2009 (Susan Storm’s Ugly Sister), so we’ll wait here until you find it. While you’re at it, better put on your scrutability belt–because there’s a lot here that’s not particularly scrutable. And without your scutability belt in place, you’ll recall, your pants of discernment will fall to the floor. If not your scrutability belt, then better wear your best ironic underwear.

This is Rachel’s seventh release–her sixth album–as the Christmas recording 7 Small Songs from 2007 is only fourteen minutes long, fer cryin’ out loud. That doesn’t count. We have to draw the line somewhere. Everything she has ever put out displays a knack for arcanity–virtuosic compositional skills married to deep, dark lyrics dredged from some faraway farrago of the remotest subconscious. Idiosyncratic Christian symbology moves through it all like a ribbon of fudge through a scoop of vanilla ice cream. Have you found your thinking cap and scutability belt? Great. Let’s continue.

We begin the festivities with “Sweetness on Earth” which is mostly a variation on an F chord played by fifty acoustic pianos. Think of the a scaled down version of the 5000 Fingers of Doctor T executing the final coffin chord of “A Day in the Life,” fused (in a more melodic context) to the concept behind Glenn Branca’s 13th Symphony for 100 guitars–Hallucination City. Fifty of anything probably sounds pretty good–the choral effect and all. Fifty elephants simultaneously honking an F note would probably be majestic, to say the least, but would certainly create a much bigger mess at Sherman and Clay than fifty pianists probably did.

Anyway, after an extended stretch of the fifty piano crescendo, a vocal choir moves in to sing “sweetness on earth and all the world rejoices.” A proper introit to the service that is about to unfold. “Sister Jean” bleakly and obliquely recounts the tale of Jeanette Maples a fifteen-year-old girl from Eugene, who died in 2009 of extreme abuse at the hands of her mother. As is often the case, Jeanette more or less fell through the cracks before she could be saved by a social services system too overburdened to rescue her from the horror of her short, miserable life.

Over a jaunty, jolly “Martha My Dear” style piano, Rachel depicts the Pilate clean hands of a blissfully apathetic world. “We’re so sad about what went down at home/nothing left to do, you know we all regret it, we’re upset/there’s nothing anyone wouldn’t have done if only we had known/nothing we could do, you know we’re all upset, oh we regret it.” A swell way to kick off an album.

Stylistically, “Taxidermy” borrows from Kate Bush, Tori Amos and Fiona Apple (whatever happened to Fiona Apple, anyway?): wide open piano punctuated about halfway through by ghostly, slippery cellos. Lyrically, the first verse seems to be a masochistic literal deer-in-the-headlights perspective of a hunted animal. “You got me you shot me and will you hang my head/on the wall of your kitchen or over your bed?”

But the second verse seems to imply that the “taxidermy” in question is actually plastic surgery. “I can help, I can do it, I can do it myself/on a not-busy Monday, the fifth or the twelfth/take a whack crack me open, plant a needle right there/on the spot where the skin barely touches my hair.” Then again, maybe the song is a follow-up autopsy on poor Jeanette Maples.

Initiating the first of several homages to three-quarter time, “Modesto Waltz”  sets an ominous scene–over dancy piano, a gray nimbus hovers: “Carrion birds are circling outside the car/I look up and wonder just where we are.” I remember having the very same sensation of San Joaquin Valley dread when I was nine, and the family car broke down in Lodi in the ninety degree heat of July, and we spent the day at the park watching black swans glumly steer around Lodi Lake in the withering sun.

Two other waltzes, “Your Big Mouth” and “Mercy in Nebraska” head in different directions–the former a fairly direct circus theme of the macabre with implicitly enigmatic interpersonal references in the lyric. “Mercy…” has a swirly-whirly, neo-romantic quality, with nineteenth century brass and winds buzzing and wheezing in accompaniment.

The story line is an elusive narrative investigating the recent enactment of the “Safe Haven” law in Nebraska, where disaffiliated parents have been inexplicably allowed to legally dump their unwanted children at any certified hospital in the state. This song is the story of one guy who unloaded nine kids, but kept one–to remember the others by, one would suppose.

The closest thing to a “single” this set has is “Pritty Pinny,” and it’s a good one. Sort of Kristen Hersh-y. John Stewart’s big beat drums drive the song like a team of horses. It’s a charming little ditty about a one in-a-million girl. “Pritty Pinny in your pocket stick your finger in a socket/sparkle like an atom bomb and lay waste.” The low howl of a chorus only deepens the mystery. “What makes you so unkind?/You trip like a buried mine.” Sure! I think I’ve met her!

The sweet, sad ballad “Scotland” is a tribute to Scott Moritz, known as Scotland Barr of the band the Slow Drags, who died of cancer about two years ago. A simple lyric winds like a creek to the wonderful river of “every minute makes a minute/every hour has decades in it/so maybe a day can last forever/maybe a month will make it better.”

“How to Make a World Class Gymnast” is a harrowing koan comprised of the voices of random people, culled from the Woodstock Deli and an unnamed library, intoning the words. “You get them when they’re young and then you bend them/First an arm/Then a leg/Then the heart/Then the head.” This is either an obscure reference to something someone connected with the Chinese National Gymnastics team said. Or it may be further exposition regarding poor Jeanette Maples–or both, maybe. An exquisite form of torture, regardless.

A Bach-like counterpoint sifts through the prayerful “Didymus the Twin v. the Divine Sparkler,” which loosely contemplates the life of Judas Didymus Thomas–ostensibly Jesus’ twin; and one of four brothers and a couple of sisters born of Mary and sired by Joe, a busy couple they.

And, finally, “Joe/The Sacred Remains” not only serves as a bookend to “Sister Jean,” an echo of “Scotland,” but also as an extroit to “Didymus…”, not easily deduced from the cerebrality of Rachel’s introspective world view. But angelic choirs usher the album out as they ushered it in, to shine in a ray of sun, divining a gray rain cloud.

You can’t just throw on a Rachel Taylor Brown album and set about to washing the dishes or cleaning up around the house, or to watch TV with the sound turned down (although it could possibly work with Criminal Minds). No, with Rachel’s work you have to gird your rhetorical loins for an onslaught of contemplation that may be anathema to the typical American psyche.

Still, there are rewards. For it’s always of interest to observe an artist in her element creating some beautifully horrific scene for the betterment/appallment of all humankind. This, for Rachel Taylor Brown, is another morbid stop along the way to salvation. Like any well-constructed artistic car accident: it’s gruesome, but impossible not to gawk at.

Now you may rest your weary head. And pull up yer pants.