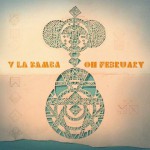 Recent recipients of the Number One slot among my highly coveted “Top 9 of 2012” awards with Court the Storm, Y La Bamba have returned eleven months later with the breathtaking Oh February. The six songs found here serve as a window into the world of artists in the midst of tremendous musical growth. The members of YLB are maturing as individuals, as musicians, and together they are ripening—very satisfyingly—as a precise musical entity of great power and portent.

They spent most of 2012 touring and re-touring the nation, while their parent label Tender Loving Empire tendered a loving new distribution deal with ADA, the premier independent music distributor (Sub Pop, Saddle Creek, the Secretly Canadian label group, Dualtone, Matador, Bar/None, etc) in the country. Finally Y La Bamba, among a wonderful lineup of outstanding TLE acts, will see the sort of national representation that they had not been receiving for the past couple of years from NAIL Distribution in Portland.

As Y La Bamba prepared for a tour as openers for the hot, hot Lumineers (who record for the Nashville-based Dualtone label), ADA requested fresh product to help to promote their new act in tandem with the Grammy nominees—thus this hastily fashioned EP. YLB drummer, vocalist and multi-instrumentalist, Michael Kitson provides insight: “Our original plan was to record a full length album in the first half of 2013 with Steve Berlin again [Berlin of Los Lobos produced Court the Storm], but this changes our plan. We’re going to try to take some time off this spring before Festival season to write and rehearse a bunch more so we can indeed record with Berlin again by the end of 2013.”

So at the beginning of December with time of the essence the band joined Chris Funk (Decemberists, Black Prairie) at Search Party studios in the old La Luna building for a sudden burst of recording grandeur. After a few subsequent sessions with Victor Nash (Point Juncture, Wa.) in his studio, the project was quickly completed. By the end of the month the record was mixed, mastered and ready for public consumption. The result is a spontaneous masterpiece. And while Funk receives credit as co-producer, Nash and especially engineer Graeme Gibson deserve acknowledgements for their contributions, as well. Gibson’s wizardry adds new sonic dimensions to several tracks.

As was noted in the Court the Storm review last year, Y La Bamba never move in a straight line, and this instance is certainly no different—although once the zig has been zagged the crew stay on course for the entire voyage. Probably the most noticeable aspect of this new album is that lead vocalist Luz Elena Mendoza sings all six songs in English. YLB’s previous albums, Lupon and Court the Storm fairly dripped with Mexican culture, as Luz mined the rich ore of her heritage. Here, the presentation is more straightforwardly mainstream, in a quirky, idiosyncratic way familiar only to this band.

And the context has changed slightly. Whereas previously the group seemed to be more or less Luz with (a very talented) supporting cast, Y La Bamba are now a fully integrated, well-oiled musical machine. The members are entirely aware that their lead singer may be one of the great vocalists living on the face of the planet, but now she is merely at the center of the action instead of being out in front of it. And the half-dozen songs here reflect a deeper spirit of collaboration and experimentation than all previous efforts.

Leading off the album, the title track would seem to be the link between what has come before and what lay ahead in the musical course these mates have charted. “Oh February” is a new song. It’s so new that the band only first played it for an audience in Annapolis at the very end of January. It’s so new that it’s two songs on this album, although the final track, “Mad As We Are,” while maintaining the lineage, departs from the components of the original to such an extent that they are pretty much two different songs.

“Oh February” begins at the point where Court the Storm—most specifically where “Squawk” and “Viuda Encabronada”—left off. Over deceptively simple nylon-string guitar accompaniment, Luz implores “Say what you want to say/Say what you mean.” Familiar divine vocal harmonies soon enter after the first turn, flowering in sprung abundance. The arrangement nearly dies, as if Luz is halting the proceedings altogether, before suddenly reeling forward, riding Afro tribal rhythms generated by Kitson and fellow multi-instrumentalist Scott Magee. According to Kitson, “Scott and I wrote the percussion part on the spot in the studio, which was actually pretty tricky due to varying meters and phrase lengths that tend to happen when Luz writes.”

Ben Meyercord’s elastic bassline tethers “A Poet’s Tune” to earth, as accordionist Eric Schrepel rings in with chiming bells and Kitson provides keyboard water tones that drip melodically. Magee’s insistent ¾-time drums are neatly counterbalanced by Edward (formerly Paul) Cameron’s gritty, grainy electric guitar intonations. Over the rivering waltz, Luz sounds as angelic as Josephine Foster (without the peculiarities). She and Cameron hover cloudlike above the rippling rapids below, as far off Meyercord and Kitson echo “Calling the rain, fall from our eyes.” A new direction for Y La Bamba, to be sure. And a delightful one.

“A Death on the Road” is nothing short of epic. A tour de force. We begin with a romantic, Old West feel, familiar to the Y La Bamba oeuvre—Luz’s voice evocatively filled with passion and intensity. Whining accordion and a cantering beat propel the tune into ghostly terrain. Wraithlike harmonies soar in the distance. The rhythm gathers momentum as electric guitar and organ begin to fleet and flitter in whirpool circles. Abruptly the impetus dissolves, with Luz chanting enchantingly, while Kitson’s piano maps the path. Slowly, celestial voices gather over a thunderous beat, Magee’s keyboard wuthering wearily to a close.

Assembling all the elements that make them such a unique band, “Clarji” is a stirring pastiche, comprised of a heartrending vocal duet between Luz and Edward accompanied by Magee on delicate ukelele and Kitson’s mellow-toned, bell-like keyboard figures. Schrepel’s moaning accordion coupled with flamenco style handclaps and foot-stomping percussion carry the tune, like a leaf blown by the wind. The song bursts briefly to life, carried by a haunting vocal theme that sounds almost like a cello. Brilliant.

Radiohead’s “There, There” comes to mind when listening to the second half of “River in Drought.” Magee’s rolling Phil Selway-inspired toms are intersected by jagged electric guitar—reminiscent of the quicksand static of Thom Yorke’s similar aural mosaic. As always, thick, lush support vocals surround Luz in luminescence, her gorgeous voice lulling in siren song.

How exactly “Mad As We Are,” fits with “Oh February” is a mystery to me, as they are two completely different songs, but it is entitled as something of a reprise. It’s an uncomplicated arrangement. Pastoral. Cameron on this occasion is responsible for simple supplementary tom and brushed snare percussion, against straightforward electric guitar. Perhaps the song is seen as a reprise, because it is February gray in context. But this too is a very new song, never performed in public and as to how it will blossom in the future remains to be heard.

Though this EP is only a little over twenty minutes long, it is still very satisfying as a piece of musical literature. Complete. It seems longer in duration—in a good way. In fact some of the songs are all too brief. But it is safe to assume that a few of them will be fleshed out and laid down again at a future date. But what is here is pure gold.

Those expecting any sort of holding pattern from Y La Bamba will be pleasantly surprised to find that they are sadly mistaken. The band has continued to grow with every gig they play. And they have played a lot of gigs in the past two years. Currently they are concluding that little East Coast mini-tour with the Lumineers. The Lumineers are this year’s indie darlings, with a Grammy nomination and performances on late night TV, as well as Saturday Night Live. This time next year, it is not at all unreasonable to expect that Y La Bamba will be in precisely that same position. This is rapturously poignant, original music at its finest. Heartfelt. Sublime. Magical.